Home | Events | Featured | Beating Guns: Hope for People Who Are Weary of Violence 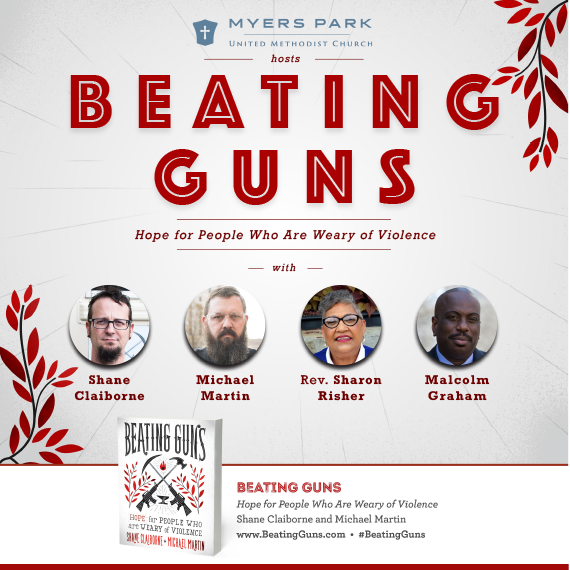 Beating Guns: Hope for People Who Are Weary of Violence

On Saturday, January 11, we invite you, your congregations, and your communities to join us at Myers Park UMC as we welcome Shane Claiborne from Red Letter Christians and Mike Martin, Executive Director of Raw Tools, as we discuss the impact of gun violence on f amilies and communities across our nation. Download our flyer for more information.

We believe that we are called to live by the Prophet Isaiah’s words:

“He shall judge between the nations,
and shall arbitrate for many peoples;
they shall beat their swords into plowshares,
and their spears into pruning hooks;
nation shall not lift up sword against nation,
neither shall they learn war anymore.

In our city alone, there have been over 100 deaths caused by guns just this year. That’s not okay. We are better than this and we as the community have an opportunity to make a statement against this r ampant violence against our neighbors. We will be joined by Councilman Malcolm Grah am and Rev. Sharon Risher as they share their stories about being personally impacted by gun violence.

To learn more about Beating Guns, visit their website at www.beatingguns.com.

Shane Claiborne is a bestselling author, renowned activist, sought-after speaker, and self-proclaimed “recovering sinner.” He writes and speaks around the world about peacemaking, social justice, and Jesus, and is the author or coauthor of numerous books, including The Irresistible Revolution, Jesus for President, and Executing Grace. Follow him on Twitter (@shaneclaiborne) and on Facebook (ShaneClaiborne).

Mike Martin is the founder and executive director of RAWtools, which partners with communities in an effort to repurpose weapons for creative and productive uses. A Mennonite pastor Mike learned to blacksmith in order to turn guns into garden tools and is passionate about connecting people to nonviolent skills like restorative justice and conflict mediation. He is trained for restorative justice facilitation and encourages everyone to explore how they can connect to similar efforts in their community. Mike is licensed for specialized ministry in Mountain States Mennonite Conference of Mennonite Church USA. Beating Guns is his first book.

On June 17th, 2015, a horrific tragedy happened; Sharon’s mother, Mrs. Ethel Lee Lance, was killed in Charleston, SC, at the Mother Emanuel African Methodist Episcopal Church. Eight others were also killed, including two of Sharon’s cousins and a childhood friend.

Since that fateful day, Sharon has crossed the nation sharing her story of loss, forgiveness, racism, and gun law reforms. She has appeared on CNN, Good Morning america, CBS, NPR, PBS, BBC, and other news outlets; been interviewed by Time¸ Essence, Marie-Claire and others; written for several print outlets including Vogue and VOX. She was a special guest of President Ob ama for the signing of gun law related Executive Orders.

Sharon is the author of For Such a Time as This: Hope and Forgiveness after the Charleston Massacre.

Malcolm Grah am is an experienced businessman, dedicated public servant and powerful public speaker, especially on the topics of race and discrimination, community and common-sense gun laws. He is a Charleston, SC, native who has lived and worked in Charlotte, NC – one of america’s fastest growing cities – for more than 30 years. Malcolm is the brother of Cynthia Grah am Hurd, one of the nine victims of the June 2015 Emanuel amE church shootings.

Malcolm developed a sense of community at a young age, singing in his church choir with his brothers and sisters. When he moved to Charlotte in 1981 to attend Johnson C. Smith University on a tennis scholarship, Malcolm began putting down deep roots and working to make his new home a better place to live, work and play.

Malcolm believes that our economy is stronger when more North Carolinians have an opportunity to participate in it. He has held high profile positions committed to fostering diversity & amp; inclusion at the Carolinas Minority Supplier Develo p.m.ent Councils, Inc, Bank of america, Time Warner Cable and Bovis Lend Lease.

Malcolm served on the Charlotte City Council, District 4, from 1999-2005. He was than elected to the North Carolina State Senate representing district 40 from 2005-2015, and served as chairman of the Mecklenburg Delegation from 2013-2015. Grah am returned backed to the Charlotte City Council in 2019, when he won the District 2 general election with over 85% of the vote.

Malcolm has been seen on MSNBC, CNN, ABC News with George Stephanopoulos, and is a recurring political analyst on Spectrum TV, Capital Tonight. His work has been published in the New York Times Washington Post, Charlotte Observer, Charleston Evening Post, CNN.com, and Time Magazine.

When he lost his sister in a national tragedy, Malcolm responded by traveling the country speaking to communities about overcoming hatred. He and his siblings founded the Cynthia Grah am Hurd Foundation for Literacy and Civic Engagement to honor their sister. The Foundation advocates for the expansion of literacy and availability of books in the Charleston community.

Even Malcolm’s “day job” is community centric. He is president of The Center for Supplier Diversity, a company he founded in 2000 and that helps corporations looking to do business with minority-owned small businesses in the community.

Malcolm’s passion for community can be seen in all aspects of his work. Community service is not one line on his resume – it’s who Malcolm is.

One of the ways you can join others in finding healthy movement opportunities is through our weekly Zoom Yoga classes taught by Meredith Starling. Classes...

The Labyrinth in Francis Chapel is now open for socially distanced walking and prayer, Tuesdays and Thursdays, 9:00 am - 12:00 noon. During this time...

Join a clergy-led small group study of Dietrich Bonhoeffer’s tiny, powerful book, “Psalms - The Prayer Book of the Bible.” In the form of both...